It is now 10 weeks since my accident! After working out in the gym for a few weeks, last weekend I tentatively ventured out on my bike. What a wonderful but slightly nervous moment it was! 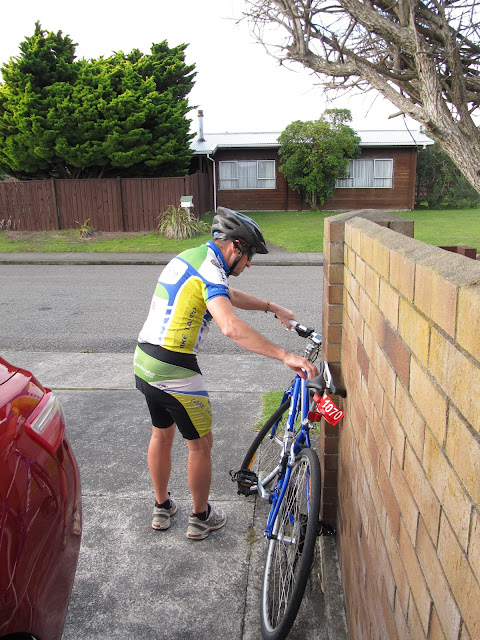 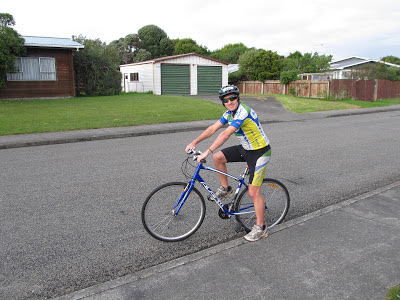 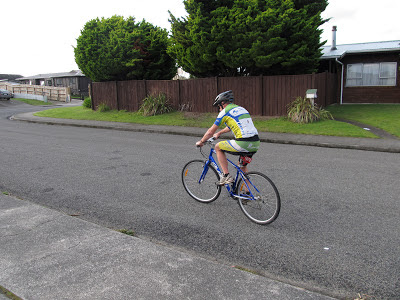 As horrific the accident and the pain of the break and subsequent recovery period was, I am and will remain a passionate and somewhat crazy cyclist. Technically 12 weeks is the recovery time for this injury but I couldn't resist getting on my bike. It is a tad risky but I am cautiously riding on quiet dry roads with super sensitive senses.

Here are some photos of happier times on that fateful ride!


Views from the Top 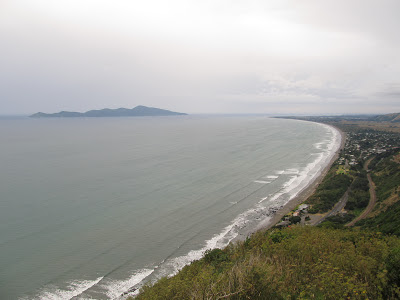 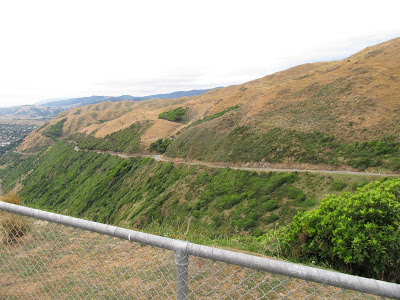 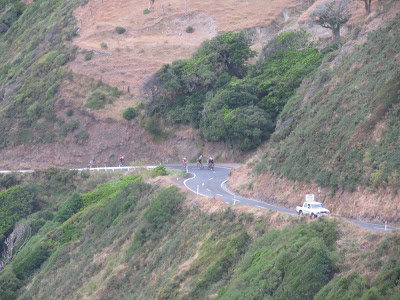 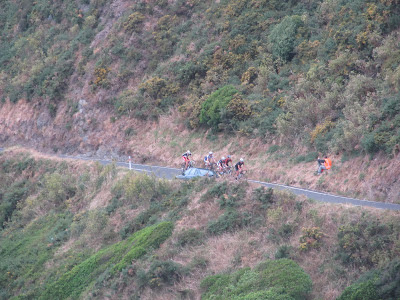 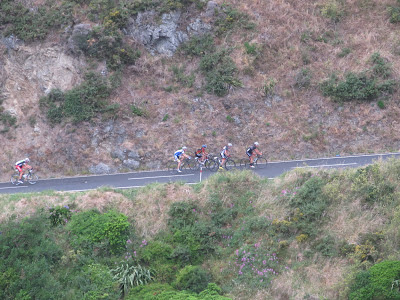 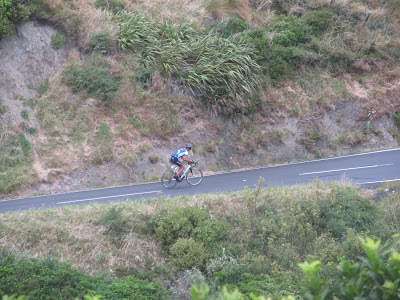 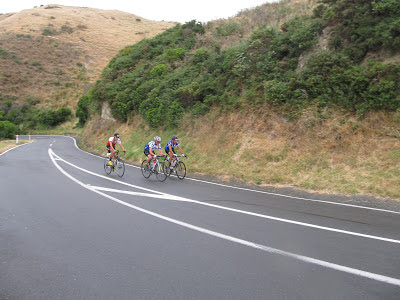 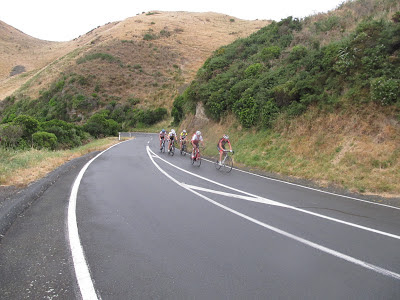 Like everything in my life I go full out. No half measures for me!

As mentioned a short time ago I started going to a gym called the Fit Club. It was almost out of necessity as with not being able to run or ride my bike on the road I was going crazy from inactivity. My physio is the director of the club and he took me along to show me a beginning weights programme, which I've been doing for 12 days now. He recommended starting weights, which of course I quickly increased as I love a challenge and with me being an obsessive type. Have also been daily on the exercycle and rowing machine and I'm really happy to be putting my body through its paces! I'm now a fully pledged member at $13 a week. I've been going twice a day some days.

15 minutes on the exercycle 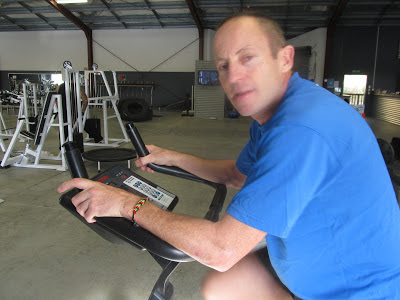 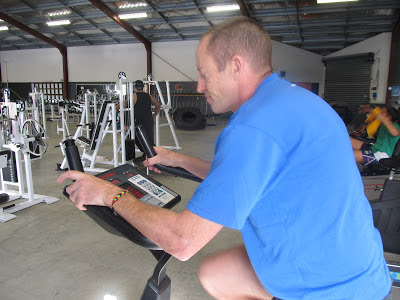 Feel a little refreshed after a short break from blogging. Have continued working out in the gym which I will post about shortly with photos.

To work my way back into blogging I thought I'd start with a mainly photo / caption post.

A couple of weekends ago Lea and I went to a local gardening shop where we purchased 2 matching terracotta pots and some flowers to grow, in preparation for our move in 8 weeks.


Into the potting mix go what we think are pansies. Please tell us if we're wrong! 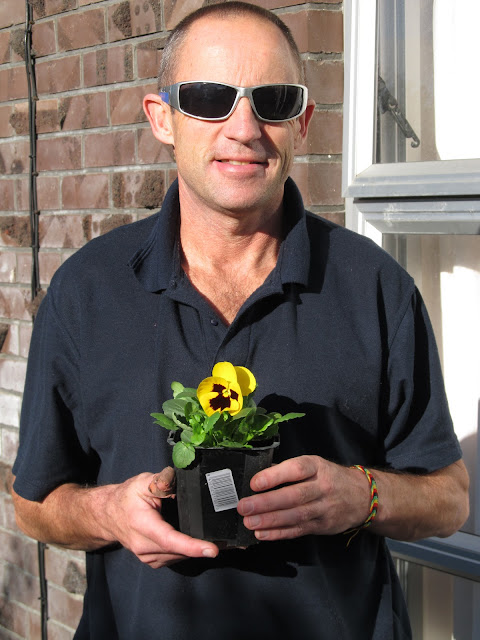 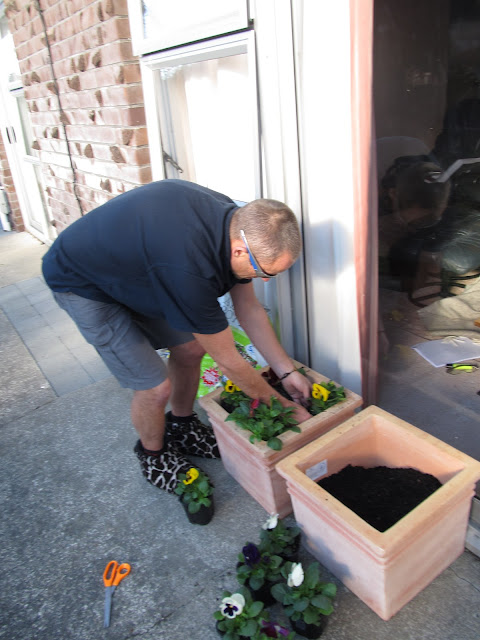 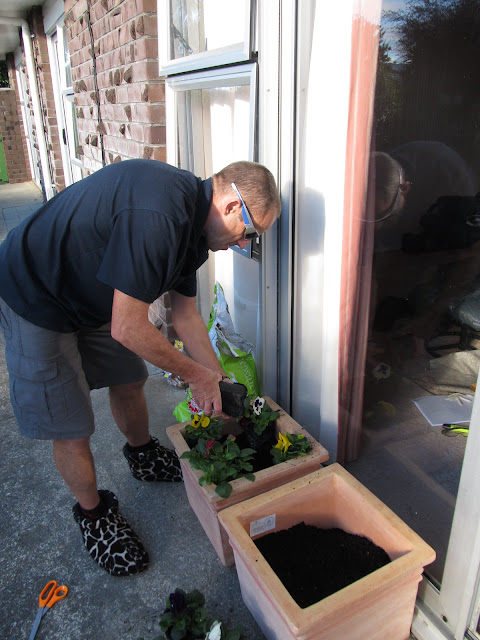 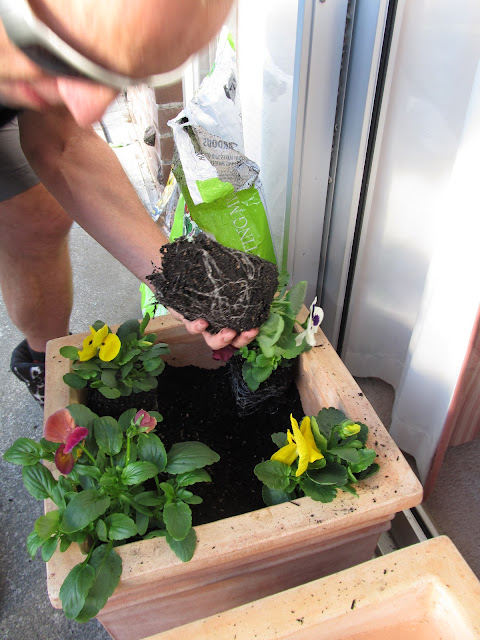 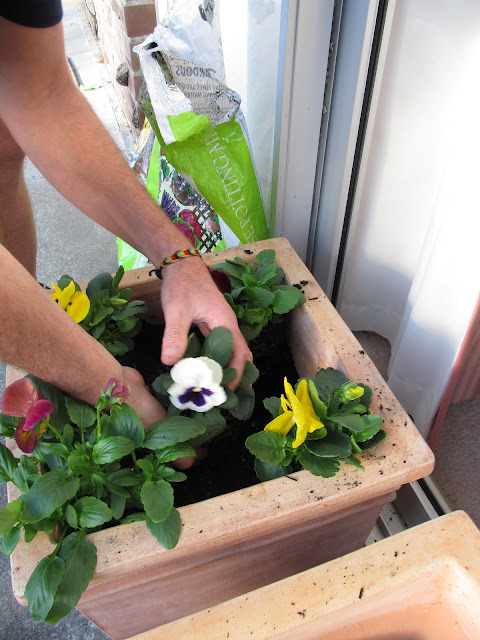 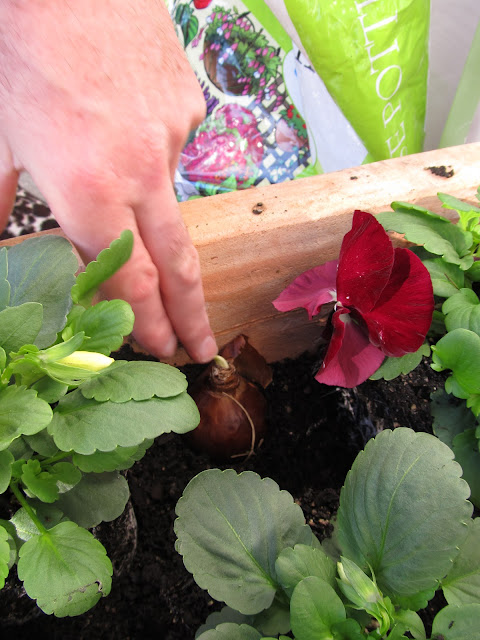 Not a lot of interest has happened recently. I've been going to the gym each day and been doing my weights, exercycling and yesterday tried out the rowing machine. I rowed 3,200 metres or 2 miles in 15 minutes...I was going for it. The hip and groin are improving and I'm off for another blood test for my clot which seems to be on track according to recent tests.

On Saturday Lea, Bianca, Caitlyn and I are going to a fun day out with Camp Quality, a subsidiary of the Child Cancer Foundation. In the evening we have tickets for watching my favourite rugby league team, the Warriors.

With this in mind I thought back to a wonderful opportunity I was given at the end of 2011. Some of you might know that Bianca suffered from Leukemia at the age of 4 and Lea has been involved with CCF since. Lea asked me to join her in her visit to Wellington Hospital and thought I might perform some of my songs. Followers from my last blog might remember this report.

In October 2011 Lea, Bianca and myself dressed up and visited Wellington Children's Hospital. Lea had us all organised in fairy and pirate costumes. I was the pirate in case you're wondering.


We visited Ward 18 armed with goodies and guitar and entertained some kids in the common area. My first song was You're Not Eating Me that accompanies my picture book, which you can see and hear below.

Bianca had a few years ago been in Ward 18 and was today wearing her beads of courage. The beads represented the many and varied treatments she'd had to fight her leukemia. I felt priveleged to be there to give some pleasure to the young children who were going through a lot of pain and discomfort.

Lea gave out some copies of my book and Bianca gave out stickers and balloons.

Here are some photos of our visit. 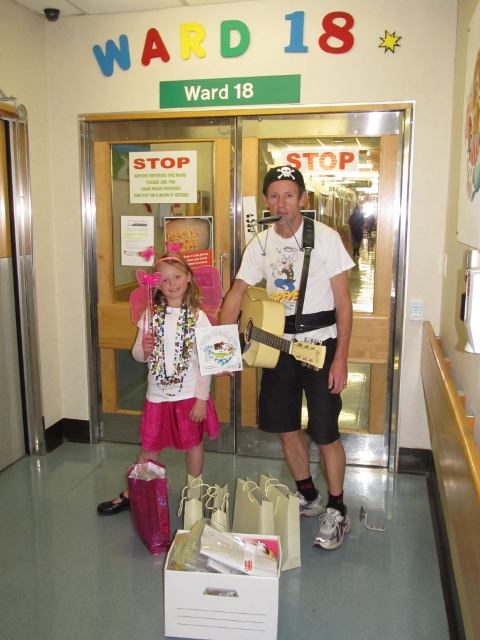 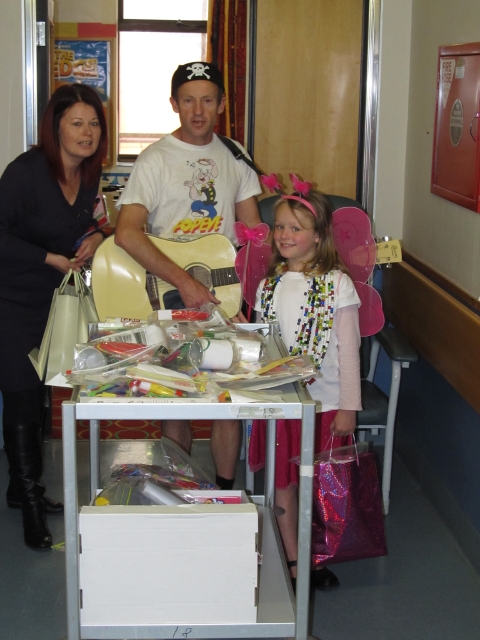 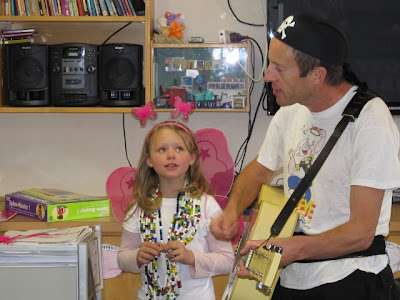 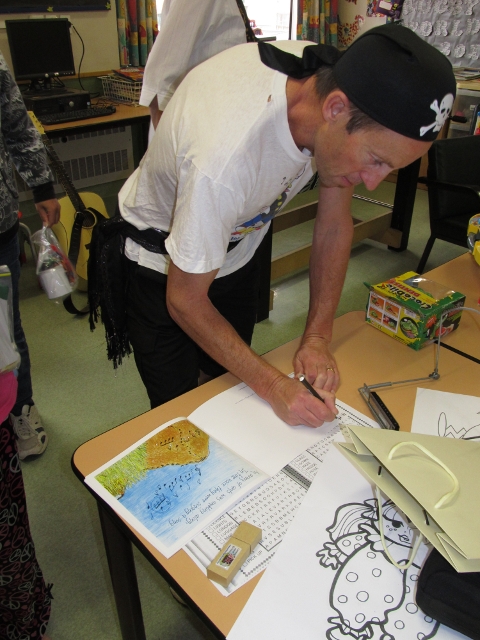 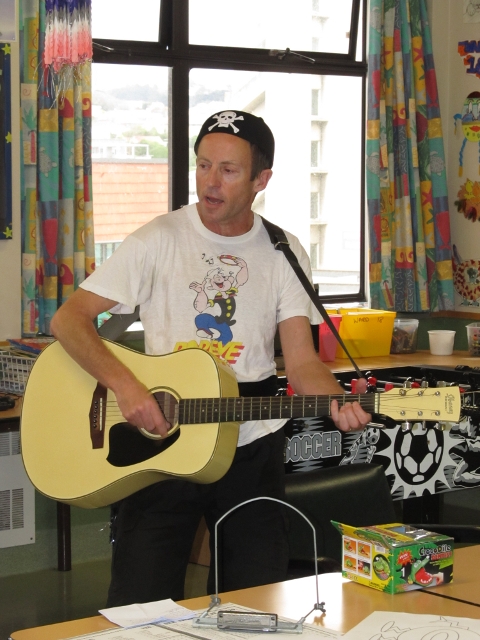 ﻿
At the moment I am struggling for blogging motivation and finding it hard to keep up with making comments. I'll try and get around my regulars today but feel it might be best to take a short Time Out. Don't expect it to be long, possibly only a few days as I really do enjoy following the people who have taken an interest in my life experiences and day by day ramblings.
Posted by Paul Forster at 06:26 14 comments:

Visiting my brother recently brought back fond memories of our time in London. Vincent and I were in London together for 2 and a half years and had some wonderful experiences.

Here is a trip down memory lane! Sorry about some of the quality but they are taken with my digital camera from prints!

I wasn't always a teacher Part 2

Murphy's Law! Having done a post where I talked about my experiences in a house with a plague of mice I have an encounter in our kitchen this morning. Yesterday I thought I saw a dark shadow move across the kitchen but thought maybe it was just my imagination. But it is now official...we have a mouse in the house! Hopefully he / she does not have a family that has also taken up residence.

On a cheerier note for me I have joined a gym...Marion would be so proud! I have resisted for many years but made my first appearance in 54 years on Friday but that's another story.

Back to the subject of this post. I was delighted to get so many comments on Part 1 of my work experiences and to read about everyone else's work experiences. We have lived colourful lives. My mice tails / tales seemed to create a lot of interest. It was truly a creepy crawly time for me and probably has added to my disgust for these creatures.

Without further ado here is part 2:-


When I left New Zealand in 1984 at the age of 24 I left with feelings of excitement but also uncertainty. I remember vividly the drive from Dunedin to the Airport with my grandmother in the back seat with me. We were both a bit upset because my grandmother was 80 and we were very close. There was a sense of maybe this being our last time together. As it turned out that was the case. On the plane I was somewhat anxious and was wondering what the future had in store.

I had a one way ticket to San Francisco with no onward journey. I had US$1500 and the plan was to travel across America finishing in New York from where I would fly to London. I took a 3 day excursion with the Green Tortoise Bus Company to Yosemite. We slept on the bus which was a new experience. Quite comfortable as the bus had fold out beds. An incredible place of remarkable beauty that I was fortunate enough to revisit with my family a few years ago.

During my time travelling in America I met some wonderful people who put me up and took me places.

I had some scary moments such as going for a run in Los Angeles having left all my valuables at a person's house I had only recently met. In horror after a 20 minute run I realised I was completely lost without an address. Thankfully after a while the lady I was staying with drove her car around the neighbourhood and rescued me.

I lived with a father and daughter in Atlanta for a short time. We were the only white people in the street which was quite weird for me coming from a place like Dunedin. I had had an extremely sheltered life to this point. Bus journeys into the city were interesting. I met a man who owned a red corvette who drove me around and introduced me to his family and running friends.

My longest stay was in Little Rock, Arkanas of all places. I met a couple who owned a health store called Beans, Grains and Things. We shared an interest in alternative music such as Joy Division. They were most friendly and kiwis were an unknown breed to them. In fact few knew where New Zealand was and some thought it was attached to Australia.  In Little Rock I was looked upon as a novelty item. The locals loved my accent and I always had a captive audience. I found I didn't have to pay for many drinks.

As much as I loved being in America all good things must come to an end. Also money was running out and I missed some basic things like watching cricket and eating Fish and Chips out of newspaper.

Just before leaving New York a rifle shot passed me into a shop window near Time Square. A frightening experience! Finally I got on the plane and headed for London. My brother, Vincent was with me in America and London. The photo below was where we lived in Queens Park, London. Just a taste of things to come!